Every now and then a property goes on the market that will blow your mind. Sometimes good and other times not so good. Here is look at some Sydney sales that truly embody the “unconventional”:

Unusual properties can often stir the emotions but they are not for everyone. A certain Surry Hills terrace – which incorporates a wine and tapas bar netting $74,000 a year, a recording studio, a luxury one-bedroom hotel apartment and separate two-bedroom residence – Back in 2005 the Moog hotel, as it was known then, was ”destined to be one of the world’s classic places to rest weary bones”, according to its own promotional blurb. It was marketed as a retreat for rock stars, with a funky, modern fit out and a pool in the centre of the property. At one stage its bar even laid claim to the most expensive cocktail in Sydney – the Amex Noir at $2000. However when the property was put up for sale in 2011 the owners were forced to sell at half of the expected price…

Stranger yet is a house that was put up for sale March last year. Affectionately dubbed the penis house…the home, officially named “Sherwin House” but called “Penis House” by neighbours and “Buckingham Phallus” by cheeky journalists, was erected in 1958 by acclaimed Aussie architect Stan Symonds, News.com.au reports. Inside, the four-bedroom house looks like a series of circles. It is only from the air or looking at the blueprints that one sees the whole package. The listing touts the tranquil bushland backdrop, double brick and concrete construction with beautiful sandstone features, and floor-to-ceiling glass in the living and dining areas.

If you are looking for a more conventional property in one of Sydney’s most liveable suburbs contact Craig Pontey, 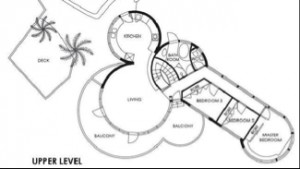