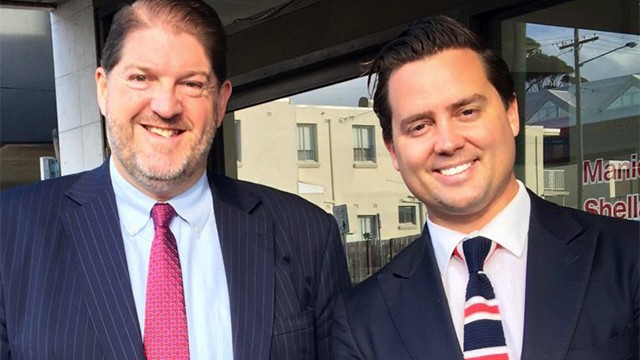 And a good working relationship between a commercial and a residential agent is something to cherished and fostered as referrals are the end-game in this industry.

The pair just exchanged on a $3.5M commercial deal in one of the fastest transactions of the year and will share the commission.

Mr Williams now has a new listing in Vaucluse and the pair have plans for more deals in the pipeline.

“I gave Evan a listing of a house in Vaucluse which was the home of one of my commercial clients. It was a great opportunity for Evan and through the open house for that home came the vendor for which we just sold his commercial building/development site,” Mr Braham said.

“The owner came through and told Evan he had a house and some shops he wanted to sell down the road and he asked Evan if he could get someone out to give him some advice about selling,” he said, of the properties at 22-24 Old South Head Road, Vaucluse.

“So Evan called me, and got me involved. The owner had requested a full marketing submission. I prepared the submission including a full development feasibility. Following the submission meeting the owner informed us that he had in fact received an offer direct from a developer and that he wanted a better price and or better terms.

“He told me on a Thursday and the very next day I had an offer of $3.5M with settlement period of just 42 days, instead of the six months in the other direct offer.”

Mr Braham said it was more than just a set a shops and a little house, it was a viable development site.

“I had proactively preparing a full development feasibility for the property to demonstrate to the owner our level of expertise and what a buyer would expect to pay. I have worked with 100s of developers over the 30 years or so that I have been a commercial agent and therefore knew who could move fast and who would see the opportunity and understand the numbers quickly,” Mr Braham said.

“To get an exchangeable offer on a contract within 24 hours is no mean feat. Commercial agents often have long timelines with their key clients, with relationships nurtured over many years, even decades. Trust and deal experience in this case was everything.

“I tapped into our Ray White Projects team to find out what they are selling nearby and to get the gross realisation rates on these projects, this gave our buyer the numbers needed to complete their full feasibility. the buyer, a developer, he was comfortable that the numbers stacked up and were the latest market data,” he said.

Mr Braham also negotiated the $3.5M transaction at a higher than normal commission rate, much higher than the fee that most residential agents receive.

“Because of the speed of the transaction, the owner agreed to give us a bonus and Evan is in for 50 per cent of the fee. That transaction would never have happened without my involvement. And now Evan and I have a few other deals in the pipeline.”

At Ray White we encourage all members in residential and rural offices to get in touch with their local commercial office or specialist and develop a professional referral relationship.

All of our commercial offices have been encouraged to do the same.

Any successful introductions will be generously rewarded with a referral fee.

Our accreditation program is for full-time commercial agents in metropolitan areas, and part-time agents in regional centres that are not a part of Ray White Commercial businesses.